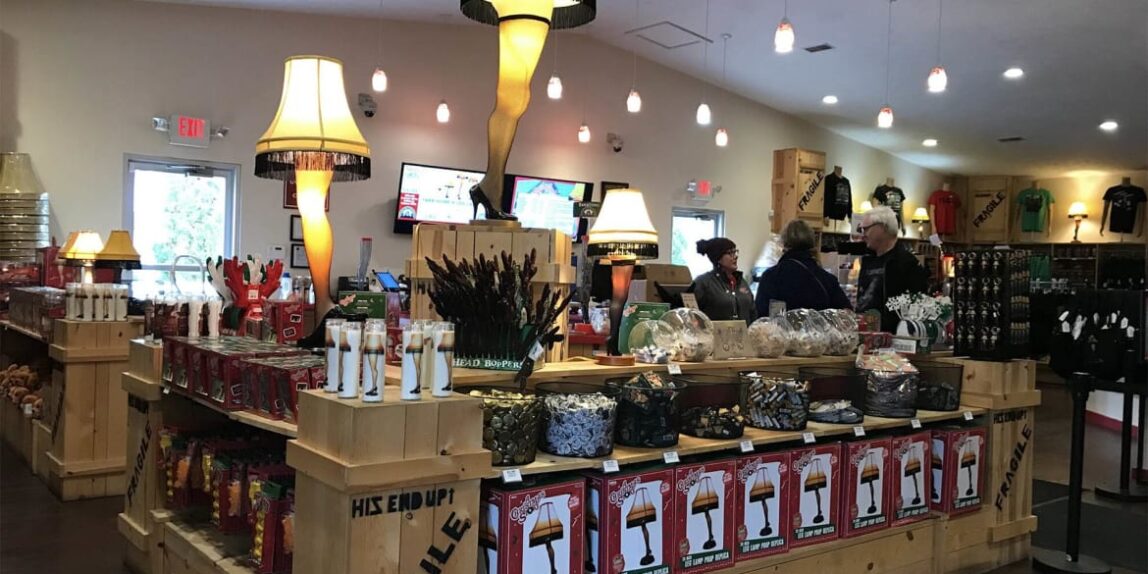 When I first saw “A Christmas Story,” I wasn’t exactly hoping for Ralphie to get a Red Ryder BB gun for Christmas. But I did empathize with him when he had his gift request rejected by a surly department store Santa, and, even more so, got the wrong end of his boot.

While on a trip to Cleveland, I learned that this 1983 movie lives on, and not just during December movie marathons. Located in the city’s Tremont neighborhood,the house chosen as the exterior for the fictional Parker family home is a public attraction. Not only can you visit the A Christmas Story House, but you can also pay to spend a night or more in the house itself.

This 1895 house is owned by Brian Jones, a superfan of the film. His admiration would lead to great things. A Southern California native now residing in Florida, Jones dreamt of becoming a Navy pilot, graduated from the U.S. Naval Academy, and went on to flight school, but sadly failed the vision test.

To cheer him up, his parents sent him a replica “A Christmas Story” fishnet leg lamp. The gift got Jones thinking about a new career and he started an online business selling these lamps in early 1999. While he was doing well with this venture, his wife sent him an eBay listing for the Cleveland house as a joke; he saw it as an opportunity.

Purchasing the as-is home in December 2004, he spent two years fixing it up and making it appear as it did in the film by referring to movie stills and giving a DVD of the film to his contractor to tell him how to make the house look. As for props, people contacted Jones if they had a specific item in their possession or told him where to find a certain one.

Jones publicly opened it on the Saturday after Thanksgiving Day in 2006, with self-guided tours and volunteers for answering questions. On that day, a line of people ran down the block, wanting to see it, and stayed that way for much of that December.

A year later, Jones created an escorted tour of the house based on its history and frequently asked questions. Visitors kept on coming, much around the holidays. And Jones realized that the street’s homeowners were being impacted by his success. To be a good neighbor to them, Jones started A Christmas Story House Foundation in 2016, a non-profit to raise funds toward restoring and maintain surrounding houses through charitable races, sponsorships and donation requests to customers.

In July 2017, Jones went further with “A Christmas Story” home by renting out its upper level. A tour is included with the cost of a stay. You can see and touch some film-related props. You’re encouraged to pick up a LifeBuoy soap bar, in the upstairs bathroom where Ralphie is punished for dropping an “F” bomb and uses Schwartz as a scapegoat. Or then pick up the handset of a wall phone, as Ralphie’s mother did to call Schwartz’s mom.

You’ll hear behind the scenes filming stories, too. Inspired by humorist Jean Shepherd’s stories about his 1940s childhood in Hammond, Indiana, “A Christmas Story” was partly shot in Cleveland, with (now shuttered) Higbee’s department store being the location for the visit to Santa scene (Shepherd narrates the film and has a cameo as a Higbee’s customer). The film’s crew spotted the Tremont house while driving through the neighborhood and thought it would be a great fit.

Today, the home’s first and second floors depict the Parkers’ on-screen residence, complete with a leg lamp in the front window. The kitchen sink has a cabinet for hiding under just like Ralphie’s brother, Randy, did.

The loft area for overnight guests is modern, with a full kitchen and bathroom, TV and DVD player, queen bed and queen pull-out sofa; you can use replicas of Ralphie and Randy’s twin beds on the second floor. Guests can roam around the entire house after its shutdown for the night and until the next morning; they then must step away as tours of the downstairs begin after 10.

Arriving on a lake effect cold day, I waited in the gift shop (more about that later on) to kill time before I could have access to the house myself. When ready, a staffer takes me to the house to a side door entrance. I’m given a numerical keypad code, which gives me access. So I go through the door and head up a long staircase to the second floor.

On this floor, I stepped into a full kitchen, making me think I was in a home rental that had some movie magic waiting behind a closed door. On a countertop, a resource binder holds instructions on what to do in the house and the area (as in, Wi-Fi password and meal options). A table has a guestbook where I quickly flip through pages and read handwritten notes of gratitude from past guests. A Keurig will take care of my caffeine needs, and I find a few leg lamp-looking mugs in a  cabinet.

You go up a set of steps to reach the third floor loft space, having the bedroom, living room area and bathroom with shower. Visual ties to the movie are easy to spot but not overwhelming. There are leg lamps on end tables. Easily spot two hung framed movie pictures: a theater poster and a still of the famous frozen pole scene signed by Scott Schwartz, who played the tongue-stuck Flick. Near the TV, a rack of Christmas DVDs respectfully contains equally recognized holiday films; I spot “National Lampoon’s Christmas Vacation” and “Disney’s The Santa Clause” mixed in with “A Christmas Story” and its 1994 “My Summer Story” (which I never heard of). There are “A Christmas Story” themed board games too, one being a Scrabble version and the other, a party game.

Your meals are left to your discretion; venture out to eat or order a delivery. So if you’re hungry, and going all in on the “A Christmas Story” theme, walk over to The Rowley Inn, a longtime neighborhood bar and maybe find patrons who might be able to reminisce over the film’s production days. I went here for lunch. When I tell my waitress why I’m here, she introduces me to the current owner. He wasn’t here until during the filming of “A Christmas Story,” but he’s been told that the cast and crew came here.

The menu lists many breakfast, lunch and dinner choices. I spot a movie-related order: It’s called The Bumpus Hounds Lunch, stacked with ingredients that you could sink your teeth into (not like the hounds, of course). It’s an open face sandwich of thick sliced turkey breast, bacon, roasted garlic and herb mashed potatoes and gravy with a side of either crispy fries or balsamic Brussels sprouts. Yet other common options—I had their smoked gouda and cheddar Mac & Cheese—are just as filling.

The house can be quiet at night, especially when you’re there alone. Within the kitchen, there is a door that brings you inside the second floor of the movie side of the home (it’s closed during tours). I wander down to the bottom floor, catching the soft glowing lamp in the front window, as I can see across the way. I retrace the steps from my tour from earlier in the day and take another look at a prop box holding another leg lamp that’s missing the T from its “This End Up” label. My tour guide said the box was cut to fit through this house’s door during filming, but whoever did it took off a bit much. And before bed, I’m left with the sole task of turning off all house lights.

House bookings happen year-round, but the holiday season gets busy (it’s sold out now through almost all of January 2019). Plan B: Stay at the Bumpus House, the fictional home of the Bumpuses, the Parkers’ next-door hillbilly neighbors with their smelly hounds who would harass “the Old Man,” aka Ralphie’s father, and steal the Parkers’ Christmas turkey.

At the door, a bright stained glass window of a hound is a nod to this stinky pack. A plaque acknowledges the home’s late owner, a woman named Joyce Seagro, who resided there during the filming of the 1983 movie and its decade-later sequel.

Since the film never shows the Bumpuses’ home life, Jones tried to best envision it. His depiction is described as being “upscale Bumpus chic.” Country living style quilts are placed on beds, while 1940s style home furnishings coincide with 21st century conveniences ( Wi-Fi and a flatscreen TV). Guests can opt to either stay one of two suites, on the first floor or on second and third floors collectively, or rent the entire house.

Across the way, a museum holds props, costumes and memorabilia such as one of the BB guns used in filming and a Nehi soda advertisement of a lady’s shapely legs that inspired that famous lamp. A picture of The Old Man (played by Darren McGavin) with his on-screen neighbor (the film’s director Bob Clark) shows them marveling at this major award. Clark, who was a Miami Dolphins fan, is shown on screen wearing a hat with the team colors; it was turned sideways to hide the logo.At the gift shop, fully replicate your visit with your own leg lamp, a Red Ryder BB gun, or other souvenirs; perhaps a pair of hideous bunny pajamas.

Sentimental, yet practical, I settled on a leg lamp magnet.