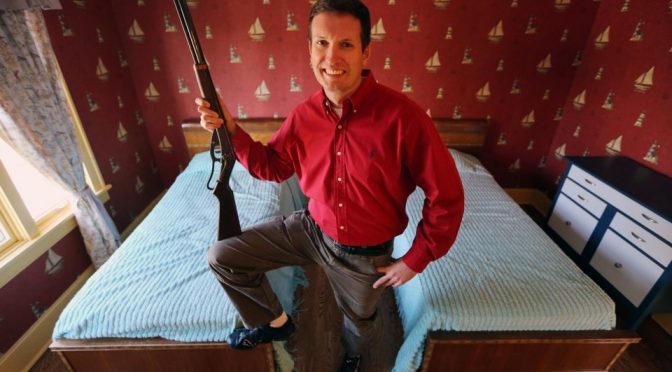 CLEVELAND, December 2, 2015—Everyone has that one special gift they hoped to receive as a child. For Ralphie Parker, it was the “official Red Ryder carbine action, 200-shot, range model air rifle with a compass in the stock and this thing that tells time.” For the first time since the 1983 holiday classic movie A Christmas Story was released, this legendary BB gun will be on display for the world to see at A Christmas Story House & Museum in Cleveland, Ohio. This vintage air rifle will be a permanent addition to the museum beginning today.

“This has been the holy grail for us—the actual BB gun used by Ralphie in the movie,” said Brian Jones, founder and owner of the A Christmas Story House & Museum. “We have had a commemorative replica on display, along with many original props, costumes and memorabilia from the film, but this is an item we’ve hoped to find for a long time.”

When a fan alerted the staff at A Christmas Story House & Museum that a vintage air rifle used in the film was for sale on a film collectibles website, Jones and his staff didn’t hesitate. They snapped up the prize for the $10,000 asking price.

The previous owner, Gary Meck, was the production asset manager for the film. According to information provided by Meck to the collectibles company, The Prop Master, six guns were made by Daisy for the production. After filming, one of the guns went to Peter Billingsley (who played Ralphie), one to the film archives, and the others to Meck and various members of the production team.

Although Daisy had been making the Red Ryder BB Gun since 1940, the version used in the film never existed as a Daisy production model. The current style at the time of the film did not have a sundial or compass, as described in the Jean Shepherd story that was the basis for the movie. So Daisy made this Christmas wish come true for little Ralphie by creating this unique model especially for the film.

“This original Red Ryder BB gun from the movie is a great addition to our collection,” said Jones. “We are excited that fans will now be able to see the real thing for the first time.”

Located at 3159 West 11th Street in Cleveland’s Tremont neighborhood, A Christmas Story House & Museum first opened its doors in 2006. This attraction takes guests on a tour through the home of the Parker family, now restored to the original movie appearance. The tours are interactive and guests are encouraged to experience and touch everything in Ralphie’s house. After touring the House, guests can step over to the Museum located across the street. In the Museum, original artifacts from the filming of the movie are on display. Next door to the Museum is the newly expanded, 3,500 square foot Gift Shop, where guests can purchase their very own Major Award or replica Red Ryder BB gun—but don’t shoot your eye out, kid! Everything in the Gift Shop is also available for purchase from the online store. A Christmas Story House & Museum welcomes over 50,000 visitors annually from all over the world and has become one of Cleveland’s leading tourist attractions. Once each year in late November, a Christmas Stay Charity Auction offers fans a chance to bid on a two-night Christmas stay in Ralphie’s house.

A Christmas Story House & Museum, now restored to the original movie appearance, is located just five minutes from downtown Cleveland at 3159 W. 11th St. in the Tremont neighborhood. It is open year-round, 7 days a week, excluding major holidays. Tours of the house run every hour. Regular admission tickets are $11 for adults, $9 for seniors, $7 for children more information or for directions, visit www.AChristmasStoryHouse.com or call 216-298-4919.