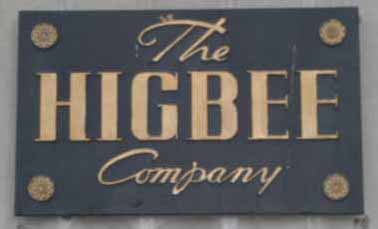 Higbee’s department store was the stage for three scenes in A Christmas Story.   The first is the opening scene in which Ralphie first spies the Red Ryder BB Gun. The large glowing “HIGBEE” sign is unmistakable. The second scene is the parade just before Ralphie goes to see Santa. The parade scene was filmed just outside Higbee’s in Cleveland’s public square at 3 AM in the morning. The final scene is Ralphie and Randy’s visit to see Santa which was filmed inside Higbee’s. Higbee’s then Vice-President R. Bruce Campbell deserves the credit for making A Christmas Story a family friendly movie and securing the movie for Cleveland.  The movie’s producers had searched several states for a traditional department store that would allow them to shoot inside.  While other Higbee’s executives were skeptical, Campbell welcomed the publicity and offered employees to feed the crew, style the performers’s hair and make up, build sets and serve as extras.  Campbell however was concerned that the profanity in the original script would damage Higbee’s family friendly reputation and personally edited it out as a condition of allowing filming to take place in Higbee’s.  Producers agreed to his edits and the nonsensical grumbling heard from The Old Man in lieu of actual curse words was actually scripted word for word instead.

Higbee’s was the first department store in the greater Cleveland area. The 12-floor Higbee Company building was the anchor for Cleveland’s Public Square from its open in 1931 until its eventual close on Monday, Jan. 7, 2002. Higbee’s operated as Dillard’s between 1992 and its close. When Higbee’s closed it was the last of the downtown department stores in Cleveland.

In 2007 the Higbee corner window and front area of the department store reopened as a Visitor Center and the headquarters for Positively Cleveland the city’s convention and visitors bureau.  The new center blends the historical features of the Higbee building with a modern and expansive visitor information area.  Fans can walk through the same doors as young Ralphie did.  They won’t see Santa, but they will discover all the wonderful events and attactions Cleveland has to offer.  In 2008 the Higbee Window was decorated with “A Christmas Story” theme to mark the 25th Anniversary. In 2012 the Higbee building became home to the Horseshoe Casino. 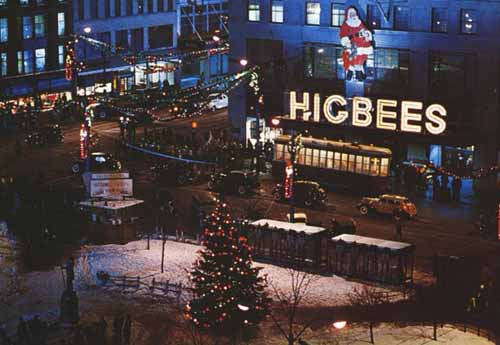 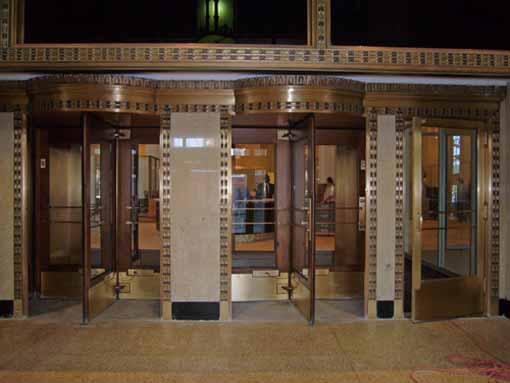 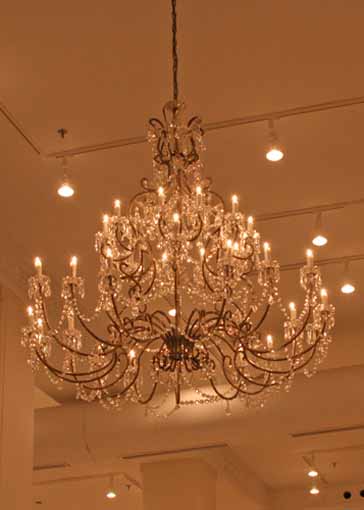 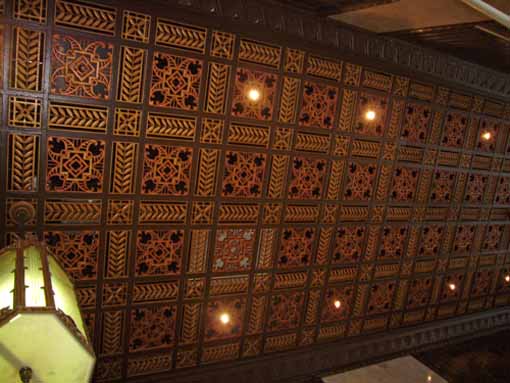 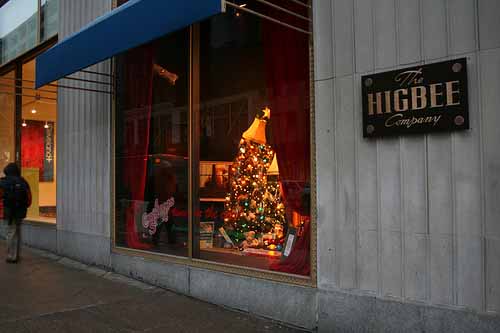 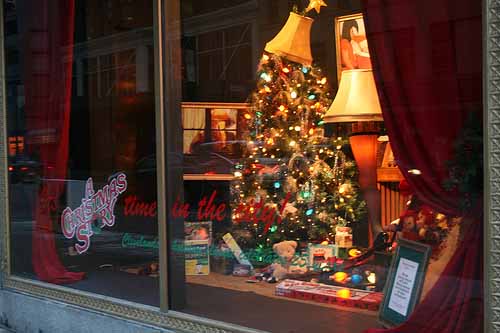 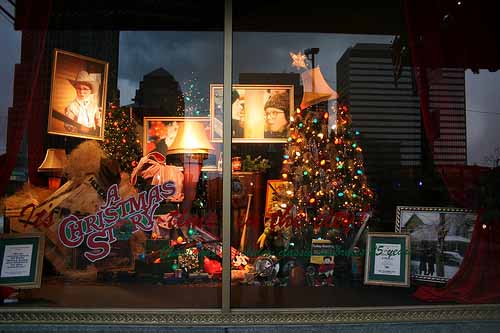 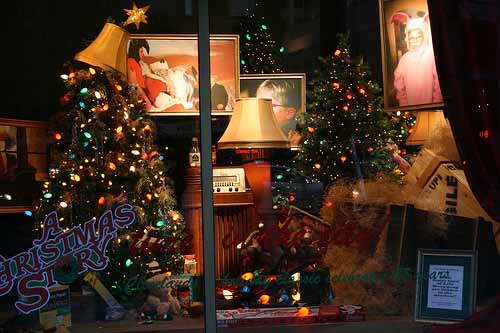 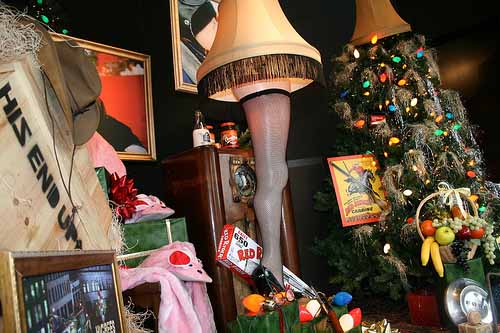 Higbee’s is named for Edwin Converse Higbee. Edwin Higbee opened the Hower & Higbee Dry Goods store in 1860 with partner John G. Hower. After, Hower’s passing, Edwin Higbee became President and the name of the store was changed to the Higbee Company. Edwin Higbee served as President from 1897 until his death in January 1906. The company lived on and opened its department store is 1931. In the decade of the 1960s, Higbee’s established 6 stores in the Cleveland suburbs. The profitable chain was sold in 1987 to Dillard Dept. Stores and Edward J. DeBartolo. At that time Higbee’s was the area’s largest sales volume retailer of high-end fashion merchandise, with 14 stores in northeast Ohio. When DeBartolo sold his share in July 1992, the chain was renamed Dillard’s.

The monument visible in A Christmas Story that sits opposite of Higbee’s in Public Square is the Soldiers’ and Sailors’ Monument. It is the Cleveland’s major Civil War memorial. Dedicated on 4 July 1894 the monument consists of an elevated base containing a tablet room. The base is surmounted by a column capped with a 15′ high Statue of Liberty, bringing the total height of the structure to 125′. Surrounding the exterior of the base are 4 groupings of bronze sculpture depicting various Civil War battle scenes. 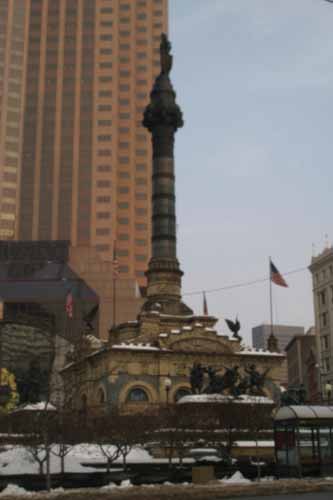 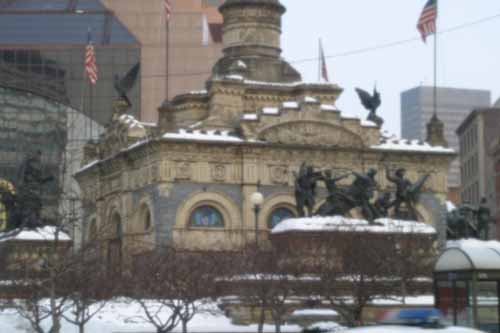 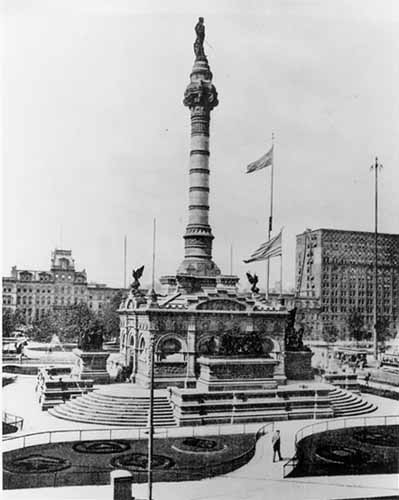