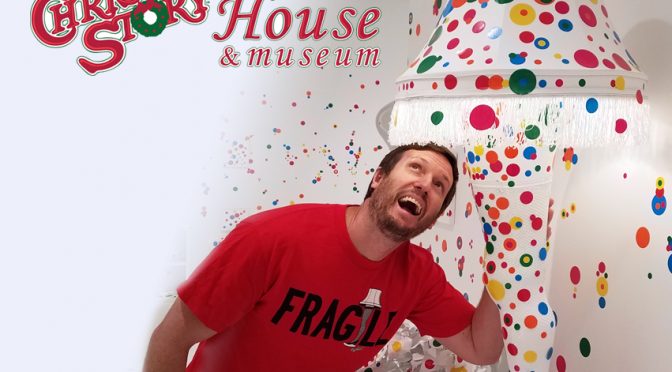 The path that has led 46-year-old Brian Jones from the U.S. Naval Academy in Annapolis to “that little house on Cleveland Street” is a result of his love for his favorite movie, “A Christmas Story.” On Nov. 25, 2006, the ongoing relationship between Jones and his favorite film took on a whole new meaning with the opening of A Christmas Story House & Museum.

A Christmas Story House takes visitors on a nostalgic journey to the sights and scenes of the classic Christmas film. In addition to A Christmas Story House, visitors can explore the museum and gift shop where original costumes, props and other items from the movie are on display, more than 100 behind-the-scenes photos are featured and movie-related memorabilia can be purchased.

A San Diego native, Jones had always dreamed of becoming a naval aviator like his father. After graduation from the U.S. Naval Academy with a degree in aerospace engineering, he went on to flight school. Once he arrived, however, he learned that he did not have the sight requirements to achieve his dream and become a pilot.

Obviously downtrodden by the sobering news, Jones’ parents decided they had just the thing to cheer him up. A couple of weeks after the unfortunate news, Jones received a large wooden crate marked “FRAGILE.” When he opened it, he found the infamous leg lamp from “A Christmas Story” inside. His parents made him a leg lamp (the “major award” from the film) to help deal with the disappointment of not becoming a navy pilot.

The film was a family favorite, and Jones’ parents had such a good recollection of the lamp that they actually recreated one. While it was a difficult and time-consuming task, it also was a humorous project for the Jones’. After sending it to their son, they told him of the significant interest that the lamp received and the fact that many people requested one for themselves.

After he left the Navy to pursue a new career, Jones was forced to make a decision about what he would do next. Struggling with the possibility of having to move to the East Coast for a corporate job, Jones remembered the comment from his parents about how popular the leg lamp had been. Jones set out to figure out a way to turn this interest into a realistic business. On April 9, 2003, RedRiderLegLamps.com – a largely online venture that sells replica leg lamps – was launched.

In the second year of his leg lamp business, Jones’ wife e-mailed him while on deployment in the Middle East. Her captain had alerted her to the fact that the house used in “A Christmas Story” was up for sale on eBay. She thought she would just send a funny e-mail about how he should buy it. For Jones, it wasn’t funny – it was a once-in-a-lifetime opportunity.

In a move that any fan could appreciate, Jones told the seller that if he took the house off the market that he would pay $150,000 for it. As quick as a tongue will stick to a metal pole in the winter, the deal was done. Within 24 hours the house was his, and Jones flew to Cleveland for the first time ever to sign the papers.

Since its opening on Thanksgiving weekend 2006, more than 1,000,000 people have toured A Christmas Story House, making it a top tourist and pop culture destination in Cleveland. Though he makes periodic trips to Cleveland, Jones currently resides in Ponte Vedra, Florida.