The Sequels – My Summer Story & Ollie Hopnoodle’s Haven of Bliss

My Summer Story (1994) is the little known sequel to A Christmas Story. My Summer Story originally titled It Runs in the Family is another collaboration of director Bob Clark and author Jean Shepherd. While the film once again features narration by author Jean Shepherd, the cast is entirely different. The only returning cast member is Ralphie’s teacher Miss Shield (Tedde Moore).

The story takes place soon after the events of A Christmas Story, still revolving around the lives of the Parker family. But summer has arrived, and with school out for vacation, fourth-grader Ralphie (Kieran Culkin) is ready to experience another life-changing season. Throughout the summer, Ralphie prepares himself rigorously to do battle with the class bully, Scut Farkus in a game of tops. Meanwhile, the Old Man (Charles Grodin) declares war on the family’s hillbilly neighbors, The Bumpus’ and introduces Ralphie to fishing, Mom (Mary Steenburgen) falls victim to a theatre manager’s con, and little brother Randy (Christian Culkin) continues his annoying ways.

As with most sequels this one is a far cry from the original brilliance of A Christmas Story. The film has received little praise or notoriety. Jean Shepherd himself admitted – “That one was a real turkey.”

A third, made for television movie about the Parker family is called Ollie Hopnoodle’s Haven of Bliss. (1988) Chronicles the Parker’s summer vacation, Ralphie getting a job, and the disappearance of the family dog. 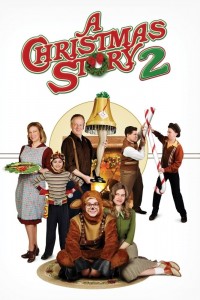