Ralphie’s fantasy encounter with Black Bart in A Christmas Story leads one to believe that Bart was some desperado. Well, in the 1870′s there was a dime novel that was loosely based on a true story. The writer called his main character Bartholomew Graham who took the name of “Black Bart” because he wore black clothes, had black long curly hair and a dense black beard.  A Christmas Story author Jean Shepherd probably read this novel as a kid and included Ralphie’s reincarnation of Black Bart as a desperado. In real life, there was a man named Charles Bowles  who was born in England in 1829 who immigrated to New York in the United States a few years later with his family.

As a young man, the real Charles Bowles changed his name to Charles Boles (and later used the name Charles E. Bolton), in 1849, he and his cousin went to California to seek their fortune in gold. They failed and, a few years later, came back. Charles Boles tried again with his cousin and his brother. Not only did they fail again, but the brother and cousin both died from an illness. Charley eventually returned and got married. After spending time in the Union Army and serving with distinction, Charles again went out west, this time to Montana where he set up a mining site that depended on water. Some men from Wells Fargo offered to buy his claim and he refused. The men reacted by cutting off his water and Charles had to abandon his mine but said in a letter to his wife,”I am going to take steps.” No one knew what he meant.  For quite some time, the last letter his wife received from him was in 1871.

It is believed that Charles started robbing stagecoaches in 1875 because, each time, a poem that intimated the perpetrator was going to strike again. It was signed “Black Bart”.  Bart robbed Wells Fargo stage coaches numerous times throughout the late 1870′s and early 1880′s. He wore a flour sack on his head and never fired a shot, though on a few occasions, shots were fired at him. There was never any mayhem or extreme violence. On November 3 1883, Bart made a mistake when he left behind a handkerchief as he made his escape following what would be his last stagecoach robbery. The Pinkerton Detective Agency was able to track the hanky from a laundry mark to an elderly man in San Francisco named Charles Bolton. Bolton admitted that he indeed was Black Bart, but he disputed his reputation as being an outlaw by telling the Pinkertons. “I am a gentleman.” It was also learned that Bolton was really Charles Boles, who years before vowed to “take steps” against the company who forced him to abandon his mining claim. His wife, who had thought he was long since dead, found out that Boles was alive when she learned of his arrest. 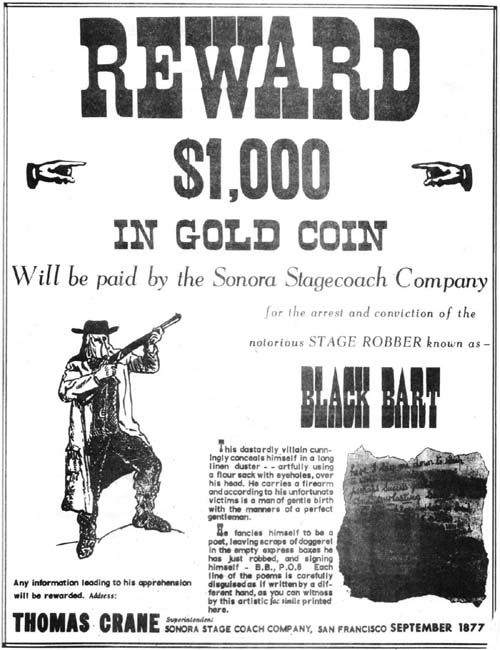 Just 18 days after his arrest, Black Bart found himself in California’s San Quentin Prison to begin serving his 6 year sentence.  His prison number was 11046.  But, he denied being Charles E. Boles or Black Bart.  Instead, he insisted his name was Charles E. Bolton.  The prevailing thought was that he was trying to protect the family that he had long since abandoned.  However, he wrote letters to his wife.  There is no record of his having received any visitors while he was in prison though rumors ran about, supposedly arising from a letter he wrote to his wife, that a wealthy man had become interested in his condition.  Speculation is that this mystery man, if he did exist, may have helped secure his early release.  Officially, he was released after 4 years and 2 months forgood behavior which was a relatively new procedure.  Reporters came calling at his release and again he insisted his name was Charles Bolton and his life of crime was behind him, though reporters tried to get him to say something different.  I guess 19th century reporters did the same thing as today’s journalists when a subject doesn’t say what they want him to say. 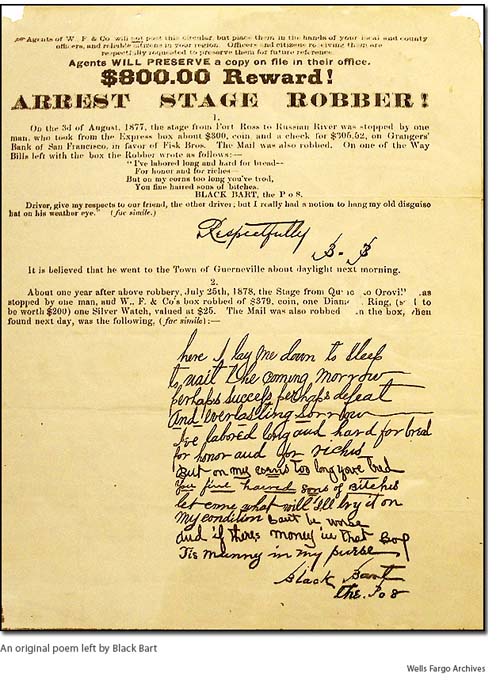 Bart returned to San Francisco where officials of Wells Fargo kept close tabs on him. He wrote his wife that he was tired of being shadowed by the boys from the bank and felt demoralized.  He wanted to get away from everyone.  He never returned to his wife but in 1888 a man answering Bart’s description checked into a hotel in Visalia and then vanished.  In his room was found a can of tongue, a can of corned beef, coffee, crackers, sugar and a jar of jelly.  There were also two neckties and a set of cuffs that had a laundry mark that read F.X.O.7.   Speculation is that he was trying to throw up a smokescreen for the boys at Wells Fargo.  If he did, it worked.  The last time anyone saw him was February 28, 1888.  The 1892 city directory listed Mary Boles as the widow of Charles E. Boles, which may indicate that she knew something. Or maybe she just gave up.  If the 1917 obituary in a New York newspaper regarding Civil War Veteran Charles E. Boles was indeed that of Black Bart, he would have been 88 years old.  Either way he is now “pushing up daisies”  but lives on each Christmas with Ralphie in A Christmas Story.