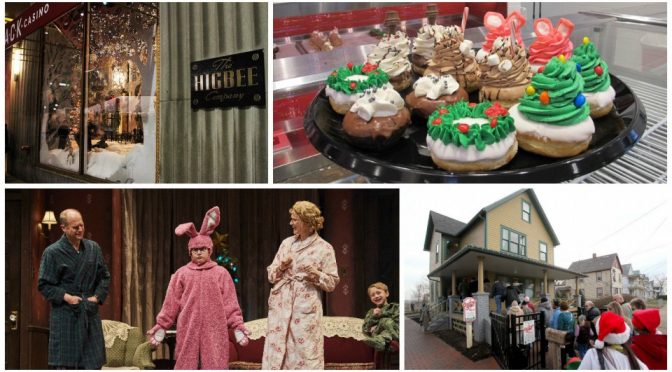 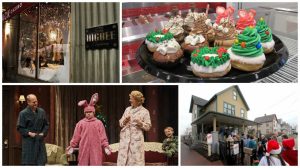 CLEVELAND, Ohio – It’s been ten years since “A Christmas Story” house welcomed Cleveland in to join the Parker family.

When the century home on West 11th Street used in the filming of the 1983 holiday classic opened its doors as a museum on Nov. 25, 2006, no one could have guessed what an impact it would have on the city. The house restored by “Christmas Story”-superfan Brian Jones almost singlehandedly helped establish ACS tourism as a cottage industry in Cleveland.

It quickly became one of the city’s top tourism draws. But the house is far from Cleveland’s only nod to the nostalgic tale about the Parker family’s pre-World War II Christmas, based on the memoirs of Jean Shepherd’s youth in Hammond, Indiana. Nowhere is Bob Clark’s holiday film starring Peter Billingsley, Darren McGavin and Melinda Dillon more celebrated than in Cleveland, where much of the movie was filmed.

It’s made “Fra-GEE-lay” part of the lexicon and leg lamps a holiday icon.

Step Inside A Christmas Story House

And in Cleveland it has made Santa Mountain, Public Square and other spots featured in the movie hot holiday destinations. Here’s a Full Cleveland “A Christmas Story” Tour.

A Christmas Story House and Museum: Ground zero for ACS fans, this humble home at the far end of Tremont has become one of Cleveland’s top tourist attractions. This time of year, fans are lining up down the street. And for good reason. Purchased by fan Brian Jones in 2006 and restored to its full cinematic glory, it provides the full Parker family experience.

Downstairs in the vintage house, visitors are greeted by the Parkers’ decorated tree and the sink where Randy hid. And, of course the glorious leg lamp in the front window. Upstairs, guests can tour the bedrooms and bathroom – and check out Ralphie’s decoder ring AND a bar of Lifebuoy soap. All that’s missing is Ralphie and his gun. Wait, is that it behind the tree? 3159 West 11th St., Cleveland; 216-298-4919. Open 10 a.m. to 7 p.m. Sunday – Thursdays in December, 10 a.m. to 9 p.m. Fridays and Saturdays. Admission, $7 to $11.

Christmas Story House and Museum Gift Shop: At 3,500 square feet, this shop – next door to the house – includes anything and everything an ACS fan could ever want on their Christmas list: bunny jammies, Red Ryder air rifles, Lifebuoy soap, board games, elf hats, Flick’s cap, DVDs, books, magnets and leg lamps galore. There’s even a sexy leg-lamp dress for the ladies.

“A Christmas Story” onstage: The Cleveland Play House’s adaptation, directed by John McCluggage – the most popular show in Play House history – is a nostalgic trip down memory lane with the Parker Family. Old Man Christopher Gerson returns this year, with Tommy Bilczo making his debut as Ralphie. The Play House’s production is a wonderful adaptation. It stays true to the nostalgic essence of the film by boiling it down to several key moments and two key threads: Ralphie’s dreams of his Red Ryder air rifle and the narrator’s melancholic dreams of his lost childhood. The children in the audience will relate to the first, played to great comedic effect in several vignettes, while the adults can’t help but be moved by the latter theme. Allen Theatre in Playhouse Square, through Dec. 23. $25-$120 at clevelandplayhouse.com or 216-241-6000.

Rowley Inn: Located across West 11th from A Christmas Story House, this 1906-built neighborhood tavern,1104 Rowley Ave., was a favorite with cast members. Recently deceased movie extra Jim Moralevitz, who delivers the leg lamp in the film, recalled to The Plain Dealer how he and “The Old Man” used to shut down the Rowley at night, then go back to his trailer for a nightcap, finally ending up sharing breakfast while he would listen to the actor recite his lines. Former owner Ted Polanski rented the upstairs out for use as a dressing area and office, too. Current owners Jon Oberman and Raphael Rivilla are paying homage to the tavern’s holiday heritage with several “A Christmas Story”-themed menu items – plus 25 percent off for visitors to the house. Featured foods include The Old Man’s Friday Morning Pizza with garlic butter, blue cheese, turkey, cheese, gravy and cranberry; and the Bumpuses Hounds Lunch, an open-faced turkey sandwich topped with mashed potatoes, bacon, cranberries and gravy. And then there’s the White Russian with Ovaltine …

Window shopping at Public Square: The Parker family wouldn’t recognize Public Square today – the site of the movies’ famous Christmas parade and holiday shopping scenes. But though Higbee’s is long gone from downtown – along with the rest of the department stores – the store that played such an important role on- and off-screen in the history of “A Christmas Story” has come alive again for the holidays. With the help of the A Christmas Story House, JACK Casino has recreated several classic Higbee’s windows – with the original decorations – in the former store space. The Old Man would approve.

Jack Frost Donuts: You won’t shoot your eye out, but it could get messy with Jack Frost Donuts’ new “A Christmas Story” donuts – in a very good way. The beloved West Side donut shop has introduced a new line of “A Christmas Story”-themed donuts, including Leg Lamp, Red Ryder and Pink Bunny donuts. The bunny cake even comes with frosted pink ears. There’s also a donut made with Ovaltine. The donuts will be available through Dec. 26. On Mondays, 5 percent of proceeds will be donated to the A Christmas Story House Foundation, a nonprofit established to restore and maintain the neighborhood surrounding A Christmas Story House & Museum in Tremont. Jack Frost Donuts is at 4960 Pearl Road, Cleveland. Orders can be placed ahead by calling 216-351-3638. They are open 6 a.m.-8 p.m. Monday through Saturday and 7 a.m.-8 p.m. Sunday.

Great Lakes Brewery’s Tripel Dog Dare: “Inspired by the rabble-rouser and mischief-maker in all of us, Tripel Dog Dare is a bratty little instigator,” says Great Lakes of their potent – 9.5 percent alcohol! – Belgian-style Tripel beer. “After all, unlike sticking your tongue to a frozen flagpole, engaging in a violent game of red rover, or chucking snowballs in a frosty battle royal, sipping Tripel Dog Dare offers a much more satisfying reward.”

The Kimpton Hotel’s Ralphie Room: Spend the night in luxury Ralphie couldn’t even imagine at the hip new Kimpton Hotel’s Ralphie Room – aka the Presidential Suite. Complete with a leg lamp, Christmas tree, pink bunny jammies, decoder ring and Life Buoy soap, the room must be booked at least three days in advance. It’s not cheap – rates start at $759 – but it is cheaper than renting the whole Parker house on eBay (see below). And, it includes discounted tickets for Cleveland Play House’s show of “A Christmas Story.”  Call 877-363-2377; the Schofield is at 2000 East Ninth Street.

Slide down Santa Mountain: Castle Noel, the Medina Christmas museum, has THE Santa display and mountain used in the 1983 film, with Santa holding court at the top.  There will even be grumpy elf on Santa Mountain this year. “A Christmas Story” star Drew Hocevar, aka “Santa’s Disgruntled Elf,” will appear at the museum from noon to 5 p.m. December 26 and 27. No promises on whether he’ll push you down the hill, but for $20 he will sign photos. 260 S. Court St., Medina. $17 weekdays, $18 weekends over age 3; at castlenoel.com or 330-721-6635.

Sleepover at the Parkers: Want to nap by the Christmas tree and open presents in your pink bunny jammies on Christmas morning? Have your very own leg lamp? Hide under the sink like Randy and shoot in the Parkers’ backyard? Well, you can – if you’re willing to pay.

A Christmas Story House and Museum  is holding an eBay auction for two nights (including Christmas Eve) in the house for four guests, plus your very own fra-gee-lay leg lamp, air rifle, night at the Renaissance Cleveland Hotel and much more.

You’ll also get private tours of the house, and Christmas morning breakfast is included. Alas, you have to bring your own presents for under the tree – though the winner will get more than $800 in gifts from the museum.

Bidding began on Thursday at ebay.com. Last year’s winner paid a whopping $8,700 for the privilege. Proceeds will go to the Christmas Story House Neighborhood Restoration Project.

24-hour marathon: What would Christmas Eve be without the ACS marathon? BO-ring. Turn to TBS at 8 p.m. Dec. 24 and let the fun begin.

Official FFFFudge:  Medina’s McJak candy shop is officially licensed to make A Christmas Story themed fudge.  Pick up a box in the Museum gift shop or online at https://www.mcjakcandy.com/

See it on the big screen: See “A Christmas Story” the way it was meant to be seen, on the big screen, when Cleveland Cinemas hosts a special screenings on Saturday, Dec. 3: 1 p.m. at the Capitol Theatre  (1390 West 65th St., Cleveland), as part of Gordon Square Wintertide festival. Admission is just $1, but they’re asking attendees to bring a non-perishable food item for the Greater Cleveland Food Bank.

Run for your Ovaltine: A Christmas Story House will have its fourth annual A Christmas Story 5K/10K Run at 9 a.m. Saturday, Dec. 3. Runners and walkers are invited to dress as their favorite movie characters as their route takes them by filming locations. The race begins at Huron Road near the Terminal Tower and the 5K ends at the Christmas Story House in Tremont, which is the turn-around point for the 10K. Registration is now closed, but with so many runners in pink bunnies jammies, it’s almost as much fun to watch.