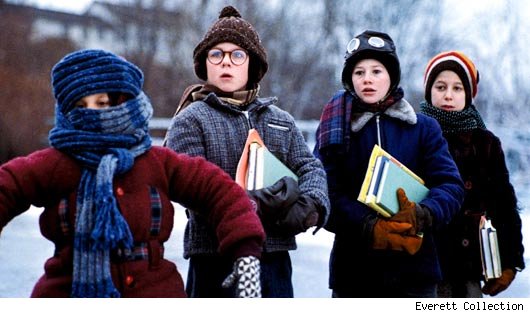 Peter Billingsley (Ralphie Parker)
Then: Before fist-fighting bullies on his quest for a BB gun as Ralphie Parker, Billingsley was a child actor in well over 100 TV commercials — including him portraying Messy Marvin for Hershey’s Chocolate Syrup. As the dumb-lucked Ralphie Parker, Billingsley delieverd one of the most famous child actor performances in film history. The image of him, with glasses and a smile on his face, getting pushed down a long slide by the boot of a stern department store Santa Claus is indelible.
Now: Billingsley has acted regularly his entire life, but much of his work recently has been on the other side of the camera. After striking up a friendship with Vince Vaughn in the 1990 made-for-TV movie ‘CBS Schoolbreak Special: The Fourth Man’and subsequently friending Jon Favreau, Billingsley has gone on to produce several projects with them (‘Dinner for Five,’ ‘Iron Man,’ ‘Four Christmases’). In 2009, he even directed his pals in the comedy ‘Couples Retreat.’

Darren McGavin (Mr. Parker, aka The Old Man)
Then: Until ‘A Christmas Story,’ McGavin had been known primarily for his TV acting; he played the title roles on ‘Mike Hammer’ and ‘Kolchak: The Night Stalker,’ as well as a series regular on the western ‘Riverboat.’ McGavin stole scenes as the sailor-mouthed Parker pop, who was as delusional about his handiness with home appliances as he was about his own swearing, and in the end, he “heroically” buys the boy that air rifle.
Now: McGavin continued to act in movies and TV until his death in 2006 at the age of 83. The highlight of this acting career (besides playing Adam Sandler’s dad in ‘Billy Madison’) came in 1990 when McGavin was nominated for an Emmy Award for Outstanding Guest Actor in a Comedy Series for ‘Murphy Brown.’

Melinda Dillon (Mrs. Parker)
Then: Melinda Dillon played the matriarch of the Parker family and the first to warn the main character that he could lose an eye with the infamous BB gun. Dillon’s most acclaimed prior performances had come in two Oscar-nominated performances, in ‘Close Encounters of the Third Kind’ and ‘Absence of Malice.’ She had also earned as a Golden Globe nomination for the Woody Guthrie biopic ‘Bound for Glory.’
Now: Dillon is largely a private person, but has continued to act. After ‘A Christmas Story,’ she appeared not only in ‘Harry and the Hendersons’ but also had a memorable role in Paul Thomas Anderson’s ‘Magnolia’ as TV game show host Jimmy Gator’s wife.

Ian Petrella (Randy Parker)
Then: Petrella’s acting career had begun at age three but landing the role of Ralphie’s younger brother, Randy, in ‘A Christmas Story,’ was his big break. Interestingly, while Petrella was not recognized immediately for his strong performance, two years later he was nominated for a Young Artist Award for the role.
Now: Petrella continued to act, and at 17, was the youngest member of the famous L.A. comedy troupe the Groundlings. Later, Ian discovered a love for puppetry, which he worked on and studied around the world. He also studied animation and continues cartooning to this day.

Scott Schwartz (Flick)
Then: Before being “triple dog dared” into licking a frozen flagpole as one of Ralphie’s friends, Schwartz had made his film debut in the Richard Pryor and Jackie Gleason comedy ‘The Toy.’
Now: In 1987, Schwartz, with his father, began managing a sports and movie memorabilia collectibles store ingeniously named Baseball Cards – Movie Collectibles Etc. After a questionable foray into adult films in the 1990s, Schwartz returned to the collectibles business and, in 2006, started a line of celebrity-based trading cards. He still appears in the odd direct-to-video movie.

R.D. Robb (Schwartz)
Then: Robb made his acting debut in ‘A Christmas Story,’ playing Ralphie’s other friend, Schwartz. (He was involved in the “tongue stuck to the flagpole” gambit.)
Now: Robb went on to appear in several TV shows and movies, most notably ‘The Brady Bunch Movie’ (as Charlie Anderson). In the past decade, Robb has transitioned to a producer role; he has half a dozen direct-to-rental features to his name. Robb’s most interesting post-‘ACS’ project was ‘Don’s Plum,’ the scandalous 1995 short film he directed, which featured Leonardo DiCaprio and Tobey Maguire. Robb and co-producer John Schindler tried to release the short as a feature-length movie, but were blocked by a law suit from DiCaprio and Maguire.

Zack Ward (Scut Farkus)
Then: In the long list of great 1980’s bullies, Ward’s portrayal of the yellow-eyed Scut Farkus sits near the top. This role marked the Canadian born Ward’s acting debut.
Now: But it certainly did not mark the end of his career, because Zack Ward has continuously worked in TV and movies ever since. From 1983 to 2010, he appeared in 80-plus projects — he’s turned up in everything from ‘Dollhouse’ to ‘The Transformers’ to ‘Deadwood’ to ‘Resident Evil: Apocalypse’ to ‘CSI’ and so on and so on.

Yano Anaya (Grover Dill)
Then: Born in London, England, Anaya played bully Scut Farkus’ “toadie” pal Grover, who helps antagonize Ralphie.
Now: If you’re a fan of Van Halen (and who isn’t?), you may remember Anaya as the young Michael Anthony in the music video for ‘Hot For Teacher.’ Anaya also appeared as a paperboy in ‘Better Off Dead,’ but stopped acting not long after that.

Patty Johnson (head elf), Drew Hocevar (male elf), and Jeff Gillen(Santa)
Then: In a crucial scene in the movie, the two villainous elves manhandle children waiting to sit on the lap of Santa, who then inadvertently scares the kids and shoves them down a slide (trust us, it’s funny). Hocevar and Johnson had no professional acting experience, but both had worked at one time or another as elves at Higbee’s, a department store in Ohio (where the film was shot). As for Gillen, he had appeared in several of director Bob Clark’s earlier movies, such as ‘Children Shouldn’t Play With Dead Things’ and ‘She-Man.’
Now: Like many others, Johnson, Hocevar and Gillen reached their thespian zenith with ‘A Christmas Story.’ Gillen created Great Southern Studios, a production company in North Miami Beach, Florida, and was its president until 1995, when he suffered a fatal heart attack. Patty Johnson and Drew Hocevar continue to live in Ohio, where both are employed as teachers.

Jean Shepherd (writer, narrator)
Then: Jean Shepherd narrated ‘A Christmas Story,’ giving voice to the adult Ralphie Parker, which makes sense because he wrote the Christmas adventure based on semi-fictional stories from his own childhood in Hammond, Indiana. Shepherd’s screenplay includes previously released material from several of his books. Also, Shepherd knew his way around a microphone, as he had a very popular three-decade radio career, during which he told stories, read poetry and organized listener stunts.
Now: Jean Shepherd never stopped creating and delighting audiences. From 1948 onward, he put on live shows at major universities and theaters, and after ‘A Christmas Story,’ he successfully focused his efforts in television, most notably on PBS. Shepherd died in 1999 of natural causes.

Bob Clark (director)
Then: Before directing this perennial holiday classic, Bob Clark had helped pioneer two now-ubiquitous films genres: the slasher flick and the teen sex comedy. The former he touched on with the 1974 horror film ‘Black Christmas,’ and the latter with the phenomenally popular 1981 romp ‘Porky’s.’ Clark wrote, produced and directed ‘Porky’s’ as well as its not-so-memorable 1983 sequel, but ultimately he left the franchise and had no hand in the trilogy-completing ‘Porky’s Revenge.’
Now: Clark continued to direct TV shows and movies up until his untimely death in 2007. His list of credits is populated by many B-movies, and Clark was the brainchild behind the largely panned ‘Baby Geniuses’ and ‘SuperBabies: Baby Geniuses 2.’ Bob Clark also directed a movie that has arguably the most hysterical premise ever: the 2004 made-for-TV movie ‘The Karate Dog.’