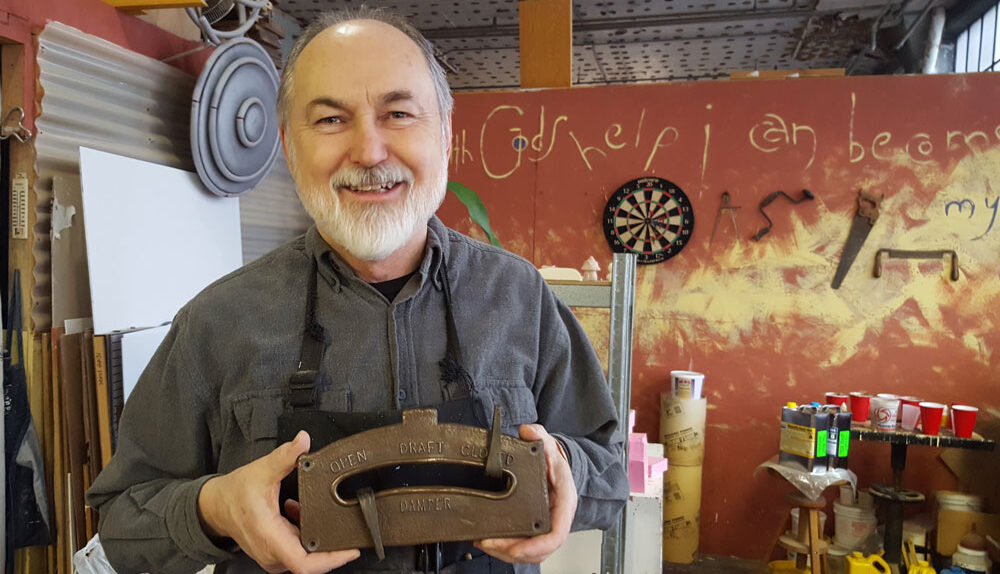 Robb Durr shows off the damper
‘Tis the season for turning on the TV and seeing A Christmas Story on replay—and loving every minute of it. If watching the beloved film for the umpteenth time isn’t enough, a visit to the A Christmas Story House in Tremont should do the trick. Curator Steven Intermill gave us the lowdown on little-known museum trivia:
1. You can stay at Ralphie’s house. This may be the ultimate fan experience, according to Intermill. “An hour after close to an hour before we open, you have the full run of the house,” says Intermill. “People spend the night in Ralphie’s and Randy’s bedroom.” (Pro tip: The house is open year-round for booking, but if interested in a holiday stay, act soon—there are only 10 days open next Christmas!

2. The new damper was custom-made. The damper from this iconic scene has become a fan favorite, but it was never commercially made so the museum was unable to purchase one. With the help of local sculptor Robb Durr, they created this one-of-a-kind prop and introduced it this year. “It took 10 years for us to actually do it, and the process was taking screenshots and some prototypes,” says Intermill. “We kind of had to go through a whole process of developing it.”

3. Famous people get into the spirit, too. Among the notables who paid a visit to the House this year were Rob Zombie and Guns N’ Roses’ Duff McKagan. (“People [were] taking pictures of him wearing the ‘You used up all the glue’ T-shirt,” Intermill says of McKagan.) In August, pro wrestler The Miz shot his own A Christmas Story parody on site.

4. You’ll shoot your eye out! The museum is always on the lookout for movie props, so when Ralphie’s Red Ryder BB Gun popped up at auction, they swooped in to bring it home for $10,000.

5. There’s (almost) always something new to see. Part of Intermill’s job is tracking down new artifacts for the museum, and the collection is so large he has to rotate the displays often, so visitors are likely to discover something new every visit.

6. There were alternate versions of the costumes. The museum recently acquired behind-the-scenes Polaroid photos showing alternate costume options including Ralphie’s cowboy suit, Patty the Elf, and more. The costumer (of Toronto-based Thunder Thighs) had passed away a few years back, and her niece offered the photos to the museum after finding them in a drawer. “It’s a pretty unique way to look at the filmmaking process,” says Intermill.

8. They got 10,000 votes. Just this week on the Lego Ideas site, the A Christmas Story house hit 10,000 votes—the magic number needed to move into the next phase of development. That means consumers are one step closer to being able to buy and build Ralphie’s house, but for now, it’s just a prototype donated by creator Jason Middaugh.

9. The curator loves his job. “I have the unique pleasure of working someplace where I get to see a lot of families and couples, just people just really having a wonderful time—it’s very heartwarming,” says Intermill. “I don’t know what else I’d want to do for a living.”

10. One movie prop still eludes them. The infamous bunny suit is owned by Peter Billingsley (the actor who played Ralphie), but the museum would love to have it, even if it’s just a loaner. Says Intermill, “Peter, if you read this, please give us a call.”